Not everyone comes to jiu-jitsu class simply to defend themselves or to get in shape. Many people hope to train to become a world-class fighter who can compete professionally. In some cases, this may involve training for sport jiu-jitsu tournaments. In other cases, fighters may want to focus on learning jiu-jitsu to become better mixed martial arts (or MMA) fighters. 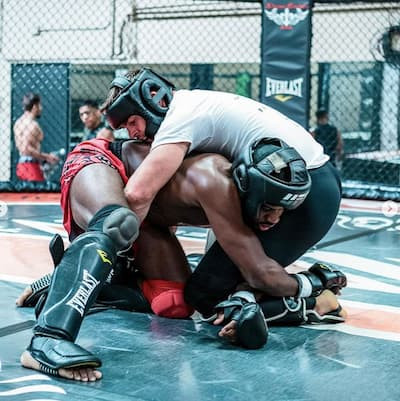 As the name suggests, MMA is a sport that combines numerous styles of fighting. Some of the most popular martial arts include jiu-jitsu, boxing, or karate, just to name a few. In some cases, fighters will primarily train in one discipline and modify it by learning another (a professional boxer may learn some judo, for example). In other cases, they’ll try to form a fusion between two distinct styles. This requires a mastery of at least two styles, but what you end up with is something that is unique from the original styles.

MMA fighters are definitely not the only people who try to create brand new fusions. Professional chefs do it all the time too, oftentimes with great success. In some cases, you get delicious abominations like the Reuben eggroll, the sushi burrito, or Taco Bell’s Mexican pizza. In the case of the Philippines, the entire country’s cuisine is a rich mix of Chinese, Spanish, Indian, Mexican, and other cultures. The mixing of flavors produces an entirely new flavor that is more than just a combination of its parts.

Another historical example of successful fusion is the Ulfberht swords. Though no more than just a few hundred were made, they were near-mythological when in use by the Vikings. These swords were made of crucible steel and were far stronger and powerful than other swords being used at the time. In fact, the steel was stronger than any steel that would be made in Europe for around 800 years. Soldiers going up against a Viking with an Ulfberht sword had about as much of a chance as a person driving a Model T going up against a Lamborghini.

Historians are still not entirely sure how these swords came into Viking hands, but the most likely explanation is that crucible steel was acquired from traders based in the Middle East or Persia, and then taken back to expert swordsmiths in Europe. The forging of one culture’s expertise in steelmaking was combined with another culture’s expertise in sword making, resulting in the production of a handful of swords that remain world-renowned to this day.

Examples in the World of MMA

This search for fusion has allowed some of the most dominant fighters in the last 20 years of MMA to create styles that are all their own. As explored in the video below, many of the best MMA fighters even today owe their success to being able to combine various martial arts so effectively.

Probably one of the most well-known examples is Georges St Pierre. Though he was not trained as a wrestler, he was able to take down other wrestlers by using footwork that he developed while training for karate. He would blitz with a timing that they were not used to seeing, which caught them off guard and gave Georges an advantage. Once he was on the ground with the other fighter struggling to transition, Georges could use jiu-jitsu to win the fight.

Edson Barboza is another example. When he can create space, he is nearly unstoppable because of his kicking technique. Other examples explored in the video include Conor McGregor, Israel Adesanya, and Jon Jones.

No Way as Way

Even if you are only casually training MMA, you’ll realize that there are numerous fighting styles converging and thousands of elite fighters experimenting with different combinations to see what fits for them. There is a lot to learn. Moreover, there is no single style that fits everyone perfectly, nor are there combinations of styles that are the best for everyone across the board. When that experimentation is successful and adapted to fit an individual fighter, you can get a nearly unstoppable result. When it isn’t, it just means you get to try something new.

This practice of searching out unique fusions and synergies is part of the fun of training MMA. It’s also a reason why the sport will continue to evolve. MMA follows the words of Bruce Lee, who said, “No way as Way. No limitation as limitation,” and these are words that individual fighters should take to heart, too. When you have no limitations and your Way is “no Way,” it means you have the ultimate freedom to create your own style and to borrow from as many disciplines as you like.