Many of my clients ask me this question once they come into the gym for an introductory class. How Dose MMA Work? What is MMA? My answer usually goes as follows… MMA (mixed martial arts) is a martial art created to overcome the reality of one on one hand to hand combat. Through the overwhelming empirical evidence of UFC fighting competitions the martial arts community finally had their cliche’ question answered. Which martial art style would work best in a fight? As the current evidence shows the martial art styles that best work in hand to hand combat has to be effective in three phases of combat Striking, Clinching and Ground fighting. However, one of the most influential coaches in MMA John Danaher has expanded on the 3 phases of combat concept and broke it down even further. As it pertains to successful fighting in the octagon… No matter what fight promotion UFC, Bellator or One FC… The first phase shoot fighting, second phase the Clinch, third phase Wall fighting and the fourth phase ground fighting.

What is Shoot Fighting?

In this phase of combat a variety of striking combinations and takedowns are used to defeat an opponent. The striking martial arts that has found success in this phase of combat are Boxing, Kickboxing, Muay Thai, Karate, Free style Wrestling and Greco roman wrestling… For the uninitiated… You may be asking… What is a takedown? Simply put a takedown is the phase of combat where an opponent is forced to the ground from a standing position with the use of grips, off balancing maneuvers and specific techniques. The Shoot fighting phase of combat uses certain principles of these 6 martial arts with the goal of out striking the opponent or taking him down to the ground. 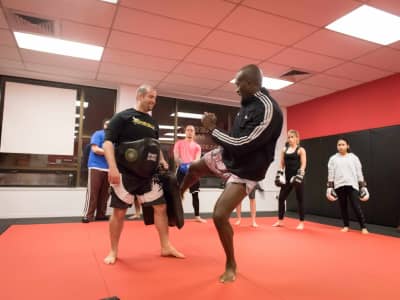 What Is The Clinch?

The clinch phase of combat occurs when two opponent are grabbing each other in the standing position. An opponent strives to obtain dominant grips where strikes can be employed, off balancing maneuvers performed and specific techniques delivered to take the opponent down to the ground. The martial arts that has found success in this phase of combat are Muay Thai, Judo, Dirty Boxing and Greco roman wrestling.

What is Wall Fighting?

Wall fighting occurs when opponents fight off the cage. The cage acts as a wall to contain the fight. Engagement between two combatants are inevitable.The goal of wall fighting is to pin an opponent on the cage with a dominant grip where strikes or takedowns can be delivered. The added variable of the cage adds a layer of difficulty for the opponent being pin against it. If an opponent is immobilize against the cage significant damage can occur. The martial arts that are highly successful in this phase of combat are Muay Thai, Free Style wrestling, Greco Roman Wrestling and Dirty Boxing.

Ground fighting is the phase in combat where submissions, strangulations and strikes are employed to end the fight. The martial arts that has shown to be highly successful in this phase of combat are Brazilian jiu-jitsu, Free Style Wrestling and elements of striking from Muay Thai, Boxing and Karate. If you are unaware of what submissions and strangulations are? Let me explain. Submissions are techniques use to manipulate joints with leverage and body mechanics. Where as strangulations are chokes that are applied with your limbs to subdue an opponent.

So The Next Logical Question Is How Do You Train For a MMA competition?

In my opinion there are several phases of training required to complete before competing. The first phase is skill acquisition. As mentioned previously the most important skills to obtain in the sport of MMA are striking, wrestling and grappling. The martial arts that has shown to be useful in these areas are Brazilian Jiu-Jitsu, Muay Thai, Boxing, Kickboxing, Free Style Wrestling and Greco Roman Wrestling. Remember this phrase “the rule of the game dictates the way it’s played”.

You may be asking… Why is that phrase important? In the skill acquisition phase proficient use of individual martial arts technique must be learned. Once learned the martial arts technique must be applied under the stress of competition within its individual sport. The student should be able perform boxing techniques under boxing rule sets, Brazilian jiu-jitsu under grappling rule sets, Muay Thai under Muay Thai rule set and wrestling under wrestling rules sets. Hence the phrase the rule of the game dictates the way it’s played. Once proficient skills of each individual martial art has been obtained. The second phase deals with blending each of the martial arts and creating a style that is individualistic to each student. This individualistic style has to be stress tested under competition. Through out the entire process physical fitness, nutrition and sport psychology are implemented to create a individual that is ready for a MMA competition.

If you are looking for an MMA school to learn self defense or looking to compete in MMA please click the free trial button to schedule a free private lesson.