Coach Firas Zahabi from Tristar Gym in Montreal teaches mixed martial arts classes. While he incorporates several disciplines to give his students a well-rounded understanding of different martial arts, he still feels that jiu-jitsu gives students the foundational tools they need to effectively defend themselves. Consequently, new students typically begin learning jiu-jitsu on their very first session. As he explains in the below video, he tends to then move on to boxing, to striking marital arts that use both the arms and the legs, and finally wrestling.

The reasons why illustrate why jiu-jitsu continues to grow in popularity not only for MMA fighters, but even for average people who want to learn how to protect themselves.

Learning to Walk Before You Run

According to Firas, jiu-jitsu is the most basic form of self-defense. He doesn’t mean this in a derogatory way. Instead, he means to say that it gives you the basics you need to keep yourself safe in a street fight when you are facing another person. He emphasizes that he is literally talking about a one-on-one fight. “I want to teach you how to fight against one person,” he says. “Not two.”

As Firas explains, his first move in a street fight situation will be to take the fight to the ground, and to then use his knowledge of jiu-jitsu to incapacitate his opponent. This gives him (and his opponent) the best chance of walking away from the incident without serious injury.

In a situation involving more than one person, however, Firas says that he would rely far more on striking. 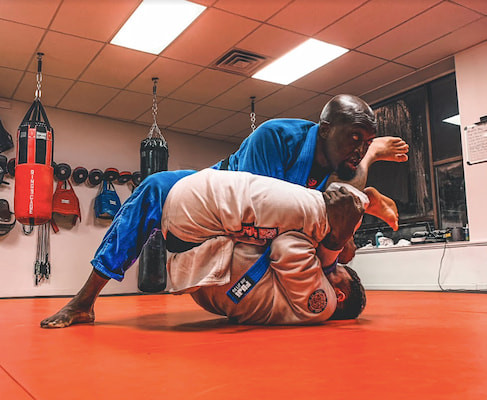 Most students who want to learn how to fight understand that it will be a workout, but it’s not the same as perfecting the art of throwing a punch while hitting the bag. The very obvious reason is because bags don’t hit back. In other words, students have come to terms with the idea that they will be expected to reenact a fight scenario and that things will get physical. Though everyone who comes to class may have accepted this, they still don’t want to get punched in the face, especially if they are easing into the world of mixed martial arts to learn self-defense rather than to one day fight in the octagon.

There’s a much bigger psychological component to getting punched in the jaw than to getting tapped out, Firas says. You can be put in a triangle choke or an arm bar without it causing pain. You just feel the pressure. Getting punched in the mouth, on the other hand, is always going to be a shock and it’s always going to hurt even if pads and gloves can minimize that pain.

Since you can learn the fundamentals of jiu-jitsu without ever throwing a punch or a kick, starting new students off solely with jiu-jitsu lessons can make them more comfortable participating in a combat sport and get them acquainted with the basics of self-defense.

It Makes Students Want to Learn

In addition to being an easier introduction to martial arts, jiu-jitsu is also something that people want to learn. As Firas says, the first time that people get arm barred, their response is typically amazement. They oftentimes laugh. They’re just amazed at how quickly and easily they can be incapacitated by someone who has jiu-jitsu training.

Instead of having their egos hurt, most students instead become thirsty for knowledge. They want to learn the techniques. They want to learn how to do what just happened to them. As they begin to understand how the techniques fit together into a larger philosophy, they become more and more intrigued. This is what ultimately keeps many students coming back for years, if not decades.